Short Story: Is there still snow in Kilimanjaro?

Last year, I was playing the photographer for kicks and I came up with those pictures in honor to the French singer Pascal Danel that I used to like back in the day, playing with his most famous song named “Les neiges du Kilimandjaro” (The snows of Kilimanjaro) and with his new album for last Christmas named "Putain d’étoile" (I’m not  100% sure, but I think it means something like “Damn Star”, and I came up with those two pictures. Although they are a bit (ok, a lot) childish, I suppose Pascal himself enjoyed them, because he shared them both in his page last Xmas...

But then I kind of had an idea for a story based on his song "Les neiges du Kilimandjaro" and in Ernest Hemingway’s book ‘The snows of Kilimanjaro. There you go! 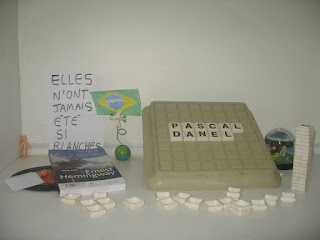 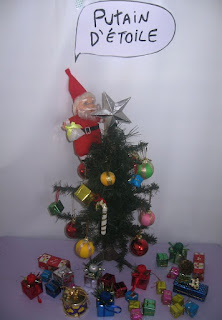 Is there still snow in Kilimanjaro?

White, white and white. Always white. Always nothing! That was all Aline and Nathalia could see ahead, to the moon and back: the whitest and softest set of walls and floor in the world. A caucasian limbo with nothing but loneliness inside.

- We can’t never have a white Christmas.
- We could at least have fake snow. I dream about the snows.
- Of Kilimanjaro?
-Perhaps, although that would mean a delirium.
- Only an illusion. I think it’s impossible to get there in real life. As far as I know, nobody has ever succeeded.
- And we wouldn’t be the first ones.
- Yes. There’s nothing special about us. Plus we would have to die first.
- But even then, we wouldn’t be the first ones. Other few delusional ones got there already.
- Because there will never be anything special about us anyway.

- “Il va mourir bientôt, elles n'ont jamais été si blanches, les neiges du Kilimandjaro…”
- I wonder if the boy from this song is Henry from the book or Henry from the movie.
- Does it matter, Nathalia?
- Call me Nathalie, please – she said impersonating a French accent.
- No, you never say Aline in the right accent either.
- I try to, but I forget.
- So I forget it too.
- Nonsense!
- Well, if you can be grumpy about the way your name is pronounced, I can do the same.
- Forget about our names. Let’s go back to Harry.
- What about him?
- If the song is about Harry from the movie or from the book.
- Well, if it’s about Harry from the book, then he’s nothing but Hemingway miserable alter ego. But if he’s Harry from the movie, then he’s a happy and hopeful Gregory Peck.
- He’s not happy in the song. Definitely not Gregory Peck. He sounds more like Hemingway.
- What if he’s neither Hemingway nor Gregory Peck?
- Then who he is?
- Pascal Danel himself?
- Pas de tout! The guy from the song is dog tired and will be dead soon and Pascal is still alive.
- He’s not dead because he succeeded in running away from Kilimanjaro.
- He’s not the guy from the song. That would be Harry.
- Harry with the happy or sad ending?
- Merde. Je sais pas! I don't know.

The talking was dying, leaving them plenty of room to lay down and die of boredom, when they heard the sound of the telephone ringing.

- Hello? – said Aline a little bit scared. She had accumulated some traumas along her twenty-two years on Earth and talking on the telephone was well-deserved in her top five.
- Have you ever considered that Gregory Peck character had the same end that Harry from the book but they cut the scene before, so the young ladies wouldn’t be sad the way you are going to be now? Sorry, guess I just ruined your childhood… - said the voice behind the telephone.
- Who is this?
- You know who I am.
- Who is this, Aline? - asked Nathalia a bit curious.
- I think it’s Pascal Danel.
- Are you nuts? Give me this phone! Hello? Ok, ok, I see... (pause) Well, Aline,  he said he doesn’t like people talking behind his back.
- Are we delusional?
- Hello? Hello? Girls are you still there? - his voice kept yelling from the other side of the line.
- Nathalie, I think someone is making fun of us. That’s not really him.
- Let me see! Hello? Pascal Merdel? Is that you, Merdel? Je t’aime, Pascal Merdel.
- Merde. Why are you calling me names? I should probably go. Adieu, les filles.
- No! Wait! Don’t hang up on us, s'il te plaît.
- Shit, you just called him shit in his face, girl.
- Well, he doesn’t like we talk about him behind his back.
- Apparently, neither on the telephone…
- Hey, Pascal DANEL, is that really you?
- Bah oui, c’est moi!
- So, what do you want from us?
- Didn’t you want to talk about the snow?
- Yes, we see it là-bas. They are going to give us a white Christmas.
- No, I thought you wanted to talk about the guy from my song.
- Hahaha! What a putain de conversation. Aline. Give me this phone. Pascal?
- I think so – the voice answered from the other line.
- So, who is the boy from the song? You or Hemingway’s Harry?
- He is whoever you want him to be. Doesn’t really matter who, but if it’s me, then I certainly would prefer to wear a white coat that is not made of snow.
- Tell us about the boy, whoever he is. Is he dead?
- I can’t speak for other people but I am alive - even if that boy is me.
- Well, Harry from the book drinks more than Gregory Peck’s Harry, and is way more pessimist.  He is Papa Hem, for sure. But they are both similar in a certain way. The guy from the song doesn’t drink and he often remembers of  his significant other. He’s in love for sure. That can’t be the same girl without any pride who begs for Harry’s love. That said, he can’t be the same Harry as well.
- Yes, I may say me and Hemingway have some different thoughts on the way to treat a mademoiselle.1
-Bien sûr! We are glad to know you are still alive. Can we meet up with you bientôt  in the whitest summer of the history?
- Yes. I know exactly where this could be, girls. We should meet up at…

They never heard the end of the idol sentence - although they had a vaguely idea of the whereabouts of that possible meeting – once they were brutally interrupted by the Nazi nurse. She wasn't really a Nazi, of course. She wasn't even a bad person. Maybe a little stressed one, but who isn't nowadays? On the other hand, the girls believed it was nosense to be interned in an asylum where the staff aren't a bit like the villains from the old movies.

- Oh, girls, again with this thing?

She took their straight jackets off and freed them from the tiny white room, while blabbering over the magic behind using telephones while having the hands tied and dating decadent celebrities. The girls left in silent heading to their room. She stayed a bit more, whistling – she was happy, had recently learned how to whistle, after her forties.

Gradually, the whistle was turning into a voice singing. She didn’t want to sing that song. She didn’t even know how to do it, but she did, as the famous melody was expelled from her mouth.